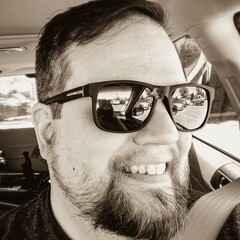 I've worked professionally as a 3D & 2D digital artist since 1999, contributing to major (and minor) film, game, and broadcast projects. Some of my career highlights include:

National TV spots for Goldfish Crackers, the FX network, and a Super Bowl spot for the game Dante's Inferno.

Special venue ride-films for The Simpsons and Ferrari.

And since 2011, I've worked as a senior and lead artist in the slot games industry, designing and developing 2D and 3D assets for premium land-based titles including Jurassic Park, Avatar, and Ghostbusters.

I'm currently employed full-time, but am sometimes available for small freelance art projects, as long as they don't conflict with my Aristocrat non-compete agreement.

When I'm not working on visual art, I record hi-tech music, some of which has been released on vinyl in Europe and on CD by Columbia Japan.